Tongue-tie (ankyloglossia, tight frenulum) is a condition in which the bottom of the tongue is tethered (or attached) to the floor of the mouth by a membrane (frenulum) so that the tongue’s range of motion is unduly restricted. This may result in various oral development, feeding, speaking, swallowing, and  jaw and face development and its associated problems.

Being tongue tied inhibits the ability to swallow by restricting the peristaltic movement of the tongue. This causes air to be trapped in the mid section of the tongue with the food bolus and positive air pressure is used to push food down, resulting in a noisy swallow and air remaining in the stomach. With a normal swallow there is a tight posterior seal with the tongue on the palate in the back of the mouth using negative air pressure (vacuum effect) thereby making the swallow effortless and silent.  Ankyloglossia will also affect prenatal jaw growth; the maxilla (top arch) will be narrow with the palatine suture line as a slight bony prominence. T his growth pattern continues into childhood and excessive forward growth of the front of the jaws with no primate spacing resulting in crowding of the teeth and a buck tooth appearance.  With Class 1 and 2 Tongues ties,   the muscles in the back of the tongue are often “bunched” making swallowing and speaking more difficult. There can also be a lateralization/flaring of the tongue in these cases where sounds like the /ch and j/ are sloppy and they are unable to curl the lateral borders past the anterior portion of the tongue – if at all. This can result in a tongue posture that is between the teeth and a lateralized swallow keeping the teeth from erupting so that they touch.

Tongue-ties can be divided into four types, according to how close to the tip of the tongue the leading edge of the frenulum is attached:

Class 1: Frenum attached 0-3 mm from tip of tongue and is attached to the alveolar ridge (bottom jaw). Tongue cannot be moved backwards or frontwards very well. The frenum creates a fence between left and right and significant problems will occur.

Class 2: Frenum attached 4-6 mm from tip of tongue is attached to the alveolar ridge or just behind.  There is a dividing line between left and right when feeling under the tongue. Some back and front motion is attainable.

Class 3: Frenum attached 7-9 mm from tip of tongue is attached to the floor of the mouth. There is a “speed bump” and the tongue moves or shudders when moving a finger left to right under tongue.

Class 4: Frenum attached 10-12 mm from tip of tongue or at the base (submucousal) and is thick, shiny and inelastic.  There is a “speed bump” when moving fingers left to right under tongue.

Types 1 and 2, considered “classical” tongue-tie, are the most common and obvious tongue-ties, and probably account for 75% of incidence.  They are heart shaped when pointed.

Types 3 and are less common, and since they are more difficult to visualize are the most likely to go untreated. Type 4 is most likely to cause difficulty with bolus (food, whether solid or liquid) handling and swallowing, resulting in more significant symptoms for mother and nursing infant.

How is tongue/lip tie fixed?

If tongue and /or lip tie is found during your examination, a referral will be made to the appropriate health care provider for a release. Most people get along very well with this short, in-office surgery.

Daily exercises are prescribed following a frenectomy to keep the scar tissue from binding the tongue back down. The formation of scar tissue can be just as debilitating as the tongue tie. Exercising should be started no later than 3 days after surgery.

Pat has practiced Orofacial Myology since 2008 in Central and Eastern Nebraska and and has been a practicing dental hygienist for 35 years. 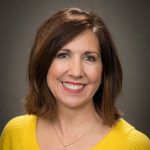